04 Oct How to Prevent Year ZERO

About 3 years ago, I was visiting India on a project field trip when the main news in New Delhi was the spate of farmer suicides occurring on a daily basis. And I was shocked to discover that the farmers were committing suicide because they had harvested a bumper crop of potatoes! The price of potatoes plummeted and many farmers were dumping their potatoes by the side of the road instead of taking them to market in New Delhi. They were then drinking pesticides and killing themselves because they couldn’t repay their debts.

We live in a socioeconomic system that depends on scarcity and it tries its best to turn natural abundance into artificial scarcity. Globally, 7.5 billion human beings consume about 1.5 billion tons of food annually. However, we procure almost 9 billion tons of food, six times as much food as we really need. But we turn this natural abundance into an artificial scarcity through Animal Agriculture. We feed nearly 7.5 billion tons of food to our animals and in return, they give us less than 190 million tons, a nearly 40 fold reduction in dry weight. Since animal foods are scarce, we compete over them and in fact, around 9 million people actually die of starvation each year, despite the fact that we are procuring 6 times as much food as we really need!

Since Animal Agriculture uses 83% of the food that we extract from Nature, it is the #1 cause of global deforestation, rainforest depletion, soil degradation, water pollution, desertification, ocean dead zones, ocean acidification, water scarcity, chronic diseases, premature deaths, food insecurity and yes, even climate change. And yet, Animal Agriculture is one of the most heavily subsidized industries patronized by governments of every stripe, throughout the world. Processed meat, which has been labeled a Group 1 carcinogen by the UN World Health Organization (WHO) alongside asbestos, cigarette smoke and plutonium, is still served to children in school lunches throughout the world, subsidized by our governments.

What is going on? Why would our governments deliberately subsidize an industry that is killing us, killing innocent animals and killing all wildlife?

This is Year ZERO, the year when all wild animals are gone. Year ZERO is fast approaching because we live in a system and culture of normalized violence. All over the world, humans are destroying original forests to make room for grazing animals or to grow crops for feeding animals. Then humans are using sophisticated geo-locating technology to catch and kill the last remaining schools of fish. And finally we are pouring 250 billion tons of toxic chemicals into the environment each year, which kill the insects which kill the birds who eat those insects. So we are attacking wild animals in the water, on land, and in the air. And this leaves them no room to survive.

But when they die off, we will die. Which brings us again to the question: why would our governments deliberately subsidize an industry that is the leading cause of death, disease, destruction and mass extinction, possibly even our own?

We co-produced three documentaries just to find out: The Human Experiment in 2013, Cowspiracy: The Sustainability Secret in 2014 and What The Health in 2017. In the Human Experiment, we found that governments are not regulating the toxic chemicals in our industrial products and effluents. Worldwide, we are pouring an estimated 250 billion tons of toxic chemicals into the environment, seven times as much as all the CO2 we are pouring into the atmosphere. And virtually nobody is talking about it. These toxins then work their way up the food chain in the environment and get concentrated in the animal foods we eat. In Cowspiracy, we found that non-profit organizations and the government don’t want to talk about the environmental impact of animal foods. In fact, our governments actively encourage us to eat more animal foods as we go up the economic ladder. Is this because these animal foods are a mechanism to inject the toxic chemicals into our bodies which then make us sick? Finally, in What The Health, we found that health care organizations and the medical industry fix the symptoms of our chronic diseases with pharmaceuticals and medical procedures without telling us that if we stopped eating animal foods, we could cure most of those diseases. At every step in this process, corporations are making money off all this death, disease and destruction. They are literally factory farming people, not just animals, and milking us for corporate profits. Our governments are actively supporting this cruel, factory-farming system because this three-part process of 1) poisoning the environment, 2) sickening people with bad foods and 3) treating them with pharmaceuticals and invasive procedures comprises around 80% of the global economy. This is the normalized violence at the core of the current system and Animal Agriculture is the key industry that keeps this system of normalized violence together. 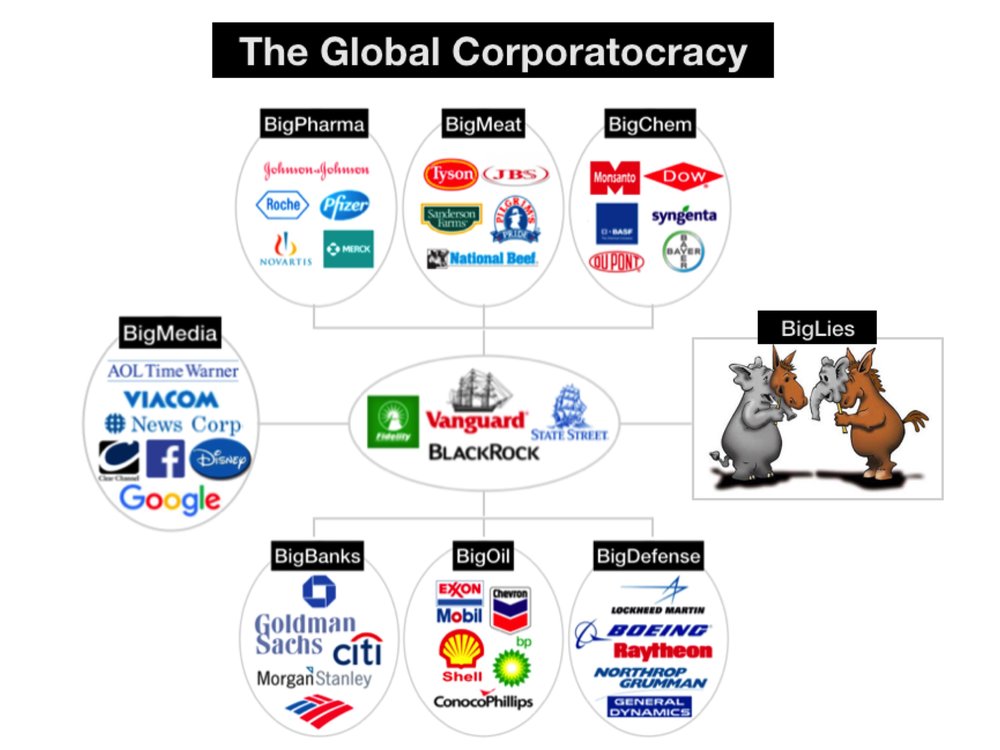 Who is behind this? We looked up the voting shareholders of Big Ag, Big Banks, Big Chemical, Big Defense, Big Energy, Big Pharma, Big Oil, Big Media and we kept finding the same four Financial holding companies: Fidelity, Vanguard, State Street and Black Rock. These are private holding companies worth an estimated $15T and together with all the mutual funds they own, they control over $50T of wealth in the economy. This is the “Corporatocracy” running the human factory farms.

Is there nothing that we can do about this?

Indeed, there is plenty we can do about this because all the power that they have comes from us! But we need to be strategic in our actions.

Imagine that you are walking down the street and you come across a man beating a dog with a stick. Would you not take the stick away from the man before applying balm to heal the dog’s wounds?

We are in an ecological emergency and our governments and the Corporatocracy are flogging the biosphere for short-term profits. While we demand that they stop, we need to be strategic about our response when they just ignore us.

Firstly, we need to take away their stick! Over a century ago, when Mahatma Gandhi faced British colonial oppression in India, he started the Khadi movement, where he pleaded with the people of India to change from British clothes to Indian made cotton “Khadi” clothes. It was a simple act that anybody could do, but it was a substantial act because it impacted the largest industry in England at that time. Gandhi wrote in the Navjivan magazine in 1926:

“I consider it my duty to induce people, by every honest means, to wear Khadi.”

Within a dozen years, the Khadi movement bankrupted the textile mills in Manchester and forced the British Colonial empire onto its knees, begging to negotiate with Gandhi.

Today, we need to change what we eat, not what we wear. This is the one simple act that anybody can do, but it is a substantial act that is already shaking the very foundation of our system of normalized violence. Therefore, the Vegan movement is the exact 21st century global equivalent of the Khadi movement of early 20th century India. It has the true potential to bankrupt the largest industry in the world at this time and force governments to actually care for people and the planet instead of catering to the Corporatocracy. We need to go Vegan and create a system and culture of normalized nonviolence in which people lead their ordinary lives and the planet thrives. To paraphrase Gandhi today,

“It is our duty to induce people, by every honest means, to Go Vegan!”

Secondly, we need to organize to clean up the atmosphere, purify the water and rewild the land that is freed up from animal agriculture, thereby restoring the biodiversity, health and vitality of the planet. Many efforts along this line have already been happening, for example, the ecological restoration of the Refugio de Los Angeles in Costa Rica from what was once a cattle farming ranch, and the Rancher Advocacy Program in Texas where former cattle rancher, Renee King-Sonnen is helping fellow ranchers transition from animal agriculture to plant-based agriculture and farm sanctuaries. 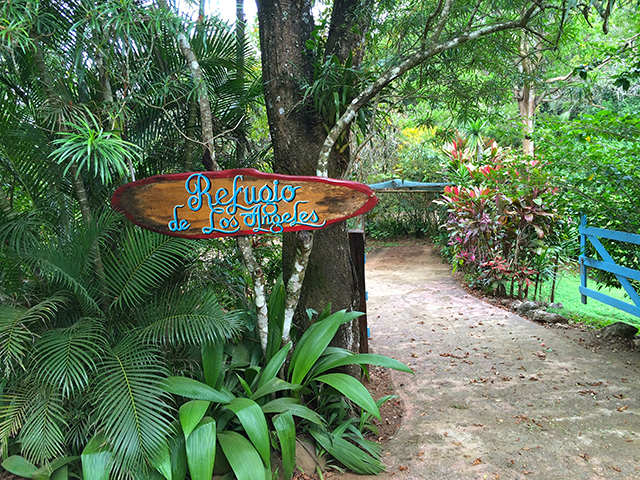 However, these efforts have been sporadic so far because there is no money in it within the current system. This is why Buckminster Fuller said,

“You never change things by fighting the existing reality. To change something, build a new model that makes the existing model obsolete.”

That new model is Vegan World 2026! with the goal to turn the whole world Vegan by 2026. Join us for the Vegan World 2026! Conference on Oct 26-28, 2018 in Phoenix, AZ, as we work to co-create an open-source system of normalized nonviolence and deploy it in order to Prevent Year ZERO from ever occurring. As Shelley Ostroff writes,

”When national and international governments fail, how can citizens of all nations unite and collaborate in an organized way to ensure a thriving future for all life?

In the face of escalating global crises, the failure of our social systems, mass awakening, and widespread access to global communications technologies, citizens worldwide now have an unprecedented opportunity to respond and organize effectively at a global level.”

Vegan World 2026! - the Moonshot of our Generation
A Declaration for Human/Earth/Animal Liberation