24 Mar Corona Healers: What Is The Earth Telling Us?

I was brought up in the Hindu tradition founded on the axiom, “Vasudhaiva Kutumbakam”, which translates to “all life on Earth is one family”. Along those lines, a viral post on social media invoked the image of a mother Earth who had just caught her human children being very naughty. It said,

“It feels like the Earth just sent us all to our rooms to think about what we have done.”

But I wonder, what if mother Earth is just telling us to overcome our differences and take care of each other first, before setting out to repair the damage that we have caused to the Earth? What if we cannot be effective at healing the Earth if we haven’t healed ourselves and our relationships with each other? There is a story attributed in the life of Mahatma Gandhi illustrating this point.

A young boy in the 1930s became too fond of sugar. His mother was quite worried about her son’s health and decided to take him to see his idol, Mahatma Gandhi. After walking for miles in the scorching sun to reach Gandhi’s ashram, she related the problem to Mahatma Gandhi. But Mahatma Gandhi declined to advice her son and told her, “Go home and come back in two weeks.” The mother was perplexed but returnefgdfd home with her son.

Two weeks later, the boy and his mother went to Gandhi’s ashram again. This time, Gandhi told the boy to stop eating sugar and the boy readily agreed. The mother then asked Mahatma Gandhi why he didn’t give the same advice two weeks earlier as they could have saved a scorching trek to the ashram and back. Mahatma Gandhi replied, “Mother, two weeks ago, I too was eating sugar.”

We must take care of ourselves first before we can take care of others. As the CoronaVirus COVID-19 pandemic rages in Europe and America, it is heart warming to see people and countries helping each other out. The human family is setting aside differences and coming together to tackle this common problem we face.

As a systems engineer, I’m in awe of Nature from a design perspective. There is so much fault-tolerance and resilience in all of Nature’s processes, while everything fits beautifully. How does a caterpillar even know when to stop consuming, consuming, consuming and enter the chrysalis phase?

Homo sapiens sapiens, the self-anointed “wise, wise species,” has now found out experientially as we have entered our chrysalis phase. During our narcissistic caterpillar phase, we lorded over the animals, gorged on them indiscriminately and heated up the Earth, while unknowingly creating all the tools and technologies we need to maintain homeostasis, a stable climate for planet Earth. All the while, we thought that we were using the mechanical inventions of our industrial revolution to “conquer and subdue Nature, to shake her to her foundations,” little realizing that we were being had.

As we enter our chrysalis phase, we are now called to acquire some humility, while helping each other shed our disease promoting eating habits and embrace a health promoting whole foods, plant based Vegan lifestyle, so that we can reverse hypertension, diabetes and heart disease, three of the main risk factors for COVID-19 mortality. Our hospital front lines are stretched thin already without us making things worse for our doctors and nurses with such reversible, pre-existing conditions.

The Earth is telling us that we cannot truly realize “Vasudhaiva Kutumbakam” in our daily lives before we realize “Manushyatha Kutumbakam” (all humanity is one family).

We cannot become Climate Healers until we have become Corona Healers.

What Else Has To Happen?
Species Distancing : Flattening The Curve On Zoonotic Diseases 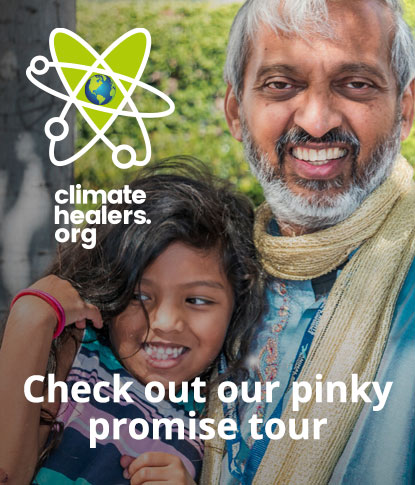